I had the pleasure of participating in AGBU’s “Sports: Shaping a Nation” conference March 22 at Woodbury University in Burbank, Calif.

The conference kicked off with me discussing how sports helps create a national identity, the role of sports in global diplomacy, how gender and youth are manifested in athletics and the value of sports for the individual, community and nation.

Over the course of the forum, I also had a question and answer with Edmond Tarverdyan about his ascent through the ranks as a boxing and MMA trainer. Tarverdyan covered a variety of topics over a 20-minute interview, including working with his most notable fighter, UFC Women’s Bantamweight Champion Ronda Rousey. 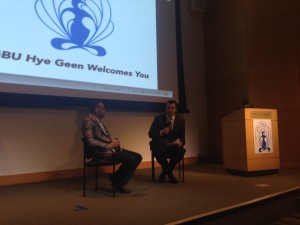 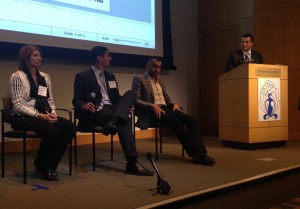 The afternoon culminated with me moderating the panel discussion featuring five professionals in their respective fields.

The Armenian General Benevolent Union, a non-profit organization that promotes identity and heritage through educational, cultural and humanitarian programs, considered me an expert in the field because of the work I’d done as the managing editor of the international lifestyle publication Yerevan Magazine. During my time at the magazine, I interviewed and wrote feature profiles on Armenia’s most notable athletes.

Organizers indicated afterwards the conference was a success, and all in all, I couldn’t agree more. 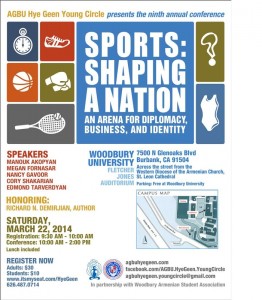 On March 22, I will have the honor of moderating and speaking at AGBU’s ninth-annual “Sports: Shaping a Nation” conference.

Below is the press release. The news was also shared by such media outlets as the Masis Post and Pan Armenian.

The AGBU Hye Geen has selected its speakers for their upcoming conference entitled Sports: Shaping a Nation. An Arena for Diplomacy, Business and Identity.

This year’s conference continues to focus on the status of the Armenian Diaspora living in the U.S. Specifically, this year, the goal of the conference is to discuss how sports helps create a national identity, the role of sports in global diplomacy, how gender and youth are manifested in athletics and the value of sports for the individual, community and nation.

The topic for the 9th annual conference explores the role of sports in a culture’s search for a place in the Diaspora while staying connected to the homeland. The goal of the conference is to educate the broader community, both students and non-students alike, on sports as a means of forging an individual and national identity.

This year’s four speakers have extensive knowledge and experience in their respective fields. They have published books and papers regarding the various aspects of sports in the local and global framework. They bring their knowledge and expertise to help us understand the role of athletics within the greater context of what creates a national identity, both within Armenia and within the borders of the greater Diaspora. This year’s roster of speakers discusses these issues and perspectives in depth.

The conference will be moderated by Manouk Akopyan, digital content producer for the National Football League. He is a journalist and writer whose in depth knowledge of sports gives him a unique perspective on its effects within an ethnic community.

Nancy Gavoor, educator and athletics coach, talks about Sports Diplomacy, exploring how athletics are used to create bonds and dialogue among nations.

Cory Shakarian, sports business executive, sales & marketing professional, will present on the Economics of Sports, exploring the importance of the financial aspect of sports on a nation and the individual. Why do countries vie to host the Olympics or the World Cup and U.S. cities compete to host the Super Bowl? How are the exorbitant salaries earned by athletes affecting the individual, team or its fans?

Megan Fornasar is a graduate student of sociology at the University of California, Los Angeles. She will present How Fans Love Their Country. Her research into the use of sports in forging a national identity sheds light on the greater purpose of athletics; going beyond being a fan to instilling pride in one’s heritage.

Edmond Tarvedyan, a trainer of world champions in MMA, boxing and Muay Thai, will speak on the importance of athletics for the youth in helping them forge their gender and personal identities. “Strong in body, strong in mind” is an example of how the importance of sports on the individual helps create a more confident, self-realized person.

This year the conference will also honor Richard N. Demirjian, author of Armenian-American & Canadian Who’s Who of Outstanding Athletes, Coaches and Sport Personalities, a detailed anthology of every notable athlete from 1906 through 1989. This immense volume of 499 pages is a significant accomplishment that adds to the historical knowledge of the Diaspora showing the extensive contributions of Armenians in both college and professional arenas.

The conference will take place on Saturday morning, March 22, 2014, at Woodbury University, in the Fletcher Jones Auditorium. Seating is limited but advance tickets can be purchased through www.itsmyseat.com/HyeGeen or by calling 626-487-0714. Adults $30, students with I.D. $10

Woodbury University is located at 7500 Glenoaks Blvd., Burbank, California (Across the street from the Western Diocese of the Armenian Church, St. Leon Cathedral). Parking is free. “The AGBU Hye Geen emphasizes that the conference is open to both men and women since these topics are of interest to everyone in the community as a whole,” says Nellie Yacoubian, leader of the Young Circle. Continuing in its conviction of collaborating with other groups for the overall good of the community, the Young Circle is partnering with the Woodbury Armenian Student Association (ASA) for the production of the conference.

AGBU Hye Geen is an organization that focuses on empowering Armenian women today as agents for change while preserving and honoring their achievements. The AGBU Hye Geen Young Circle helps the organization stay relevant by exploring different issues facing the current generation of Armenians now living in the United States. The AGBU Hye Geen organizes an annual conference to explore the potential of the Diaspora community in the various aspects of its development. Most recent topics have included “Cuisine: A Culture’s Ambassador” (2013), “Symbolism in Art, Architecture and Design” (2012), “Music as a Mirror” (2011), and “The Power of Broadcast Media on Ethnic Communities” (2010).

I’m mad as hell and I’m not going to take this anymore.

That’s the famous line from the movie Network (1976), and that’s how I feel these days when I play basketball. So many of pickup basketball’s unwritten tenets are broken on a daily basis.

The principles of the game are simple: play a handful of games, burn some calories, banter about current events, seek camaraderie, then go home and brag about your accomplishments.

However, there are always a spoiled few out of the bunch. Don’t be any of the ass-clowns below.

Accessories guy – Just because Foot Locker had a 70 percent off sale doesn’t mean you leave the house wearing the clearance aisle. Give your wife her leggings back, its 95 degrees after all.

Jersey guy – We all know you once paid top dollar for that Tracy McGrady Orlando Magic jersey, but opt for something less obtrusive. Your nipples will thank you later, and your basketball bros won’t remember you as “Tracy.”

Shirtless guy – Your sweat-soaked shirt was your best source of offense and now you’ve gone commando? This makes you the equivalent of the Bubonic plague.

Three-point sniper guy – You’re not Stephen Curry, so stop camping beyond the arc like it’s a day after Christmas sale. Move around. Set a screen. Grab a rebound, or go home.

Reckless abandon guy – This isn’t Pamplona’s running of the bulls, so don’t charge around the court like you just downed a container of NO-Xplode.

Pat on the ass guy – You want to congratulate me on a good game? Grab me a Gatorade, not my ass.

Know it all guy – He begins every game by asking if they should play man or zone, is a stickler for in-game adjustments and is the first to talk shit about a teammate as soon as they hit the water fountain. Section 9, Code 73 indicates you need a new hobby.

Living in the past guy – He once scored 11 points in a high school game, his friend plays Division Three ball and he hasn’t hooped it up in five years — or so he says just to cover his ass in case he plays like shit.

Cut your fingernails guy – If I wanted to go one-on-one with Wolverine, I’d play a game of Marvel vs. Capcom.

Turnover guy – He travels so much he needs a passport every time he plays, but whenever he’s called out on it, he vehemently fights back as if accused of murder.

Over the hill guy – You know who I’m talking about — the cagey veteran that’s usually the oldest dude on the court. He wears pads on both knees, volunteers to take the ball out every half-court possession and keeps score to look resourceful. Sadly, his Alzheimer’s doesn’t make this all that pragmatic. But no worries, he only has one game in the tank.

Cherry picking guy – We’re not vacationing in Fresno; run back down the court.

Jordans guy – Did you come to play, or get off on compliments for sporting a pair of shoes you stood in line for three days to buy?

Ass-ics guy – The last time you picked up a ball was when you tossed it to your cat. Foot your Asics back to your Prius, not to the hardwood.

And there you have it. Bookmark it. Print it. Keep a copy in your wallet or get ready to get called out next time you commit any of these heinous crimes.